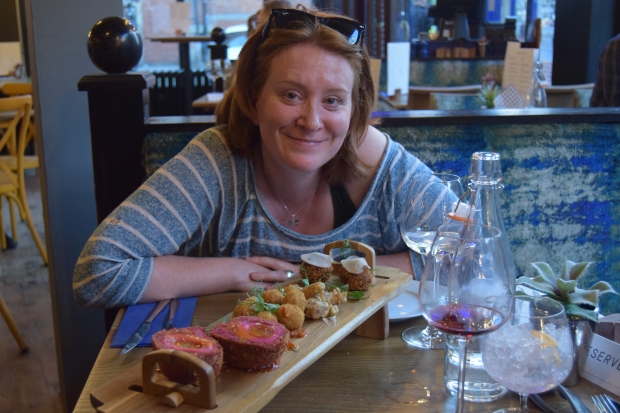 A couple of weeks ago, we were invited down to much loved Northern Quarter haunt, The Blue Pig, to try out a taster menu. It had been specially put together to showcase their re-launch and brand new menu! To say I was excited was quite the understatement. So let’s get right into it. 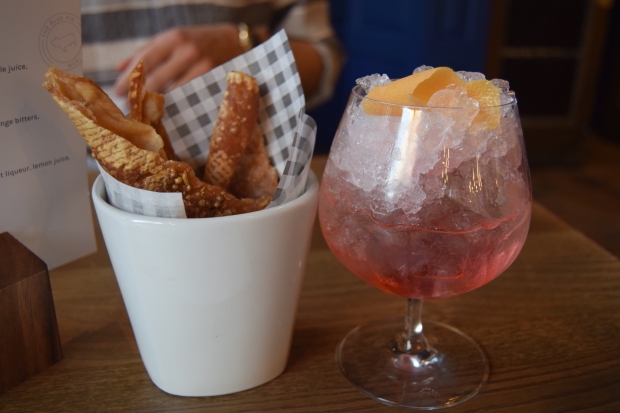 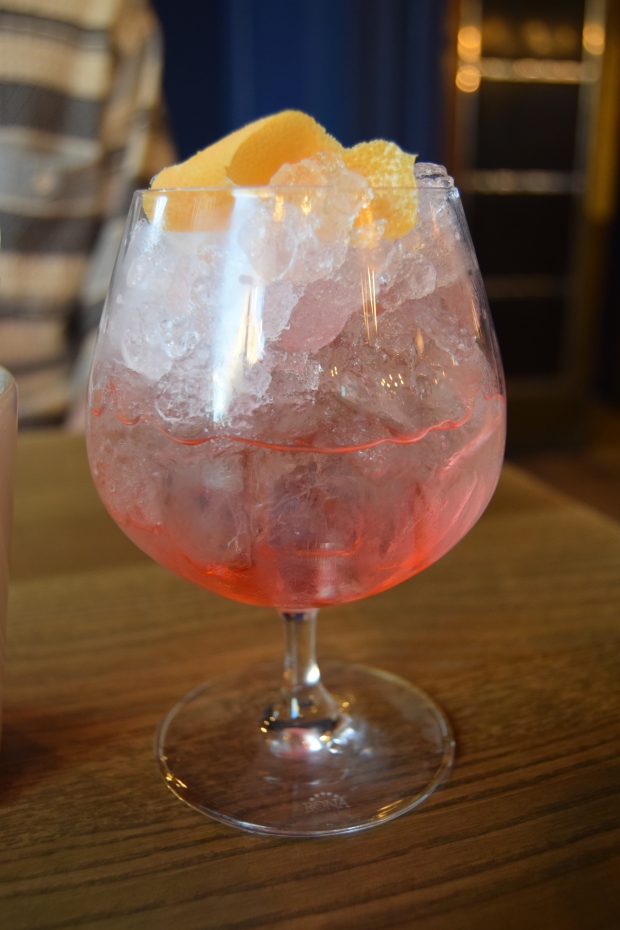 First up, we started with some nibbles and a cocktail. The cocktail was wonderfully sharp and really woke up the tastebuds. It was a Negroni Bramble, made with Tanqueray Gin, Lillet Vermouth and a grapefruit liquer – a very refreshing start. 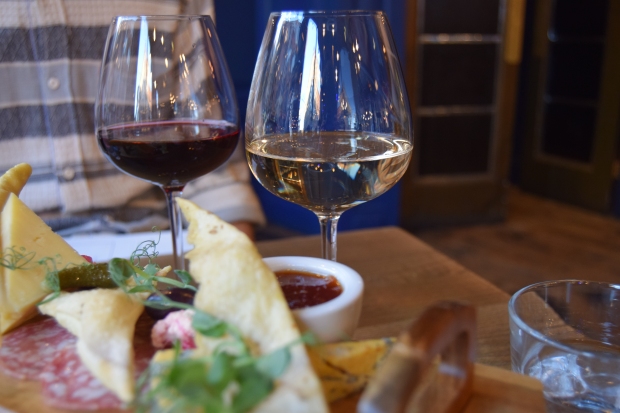 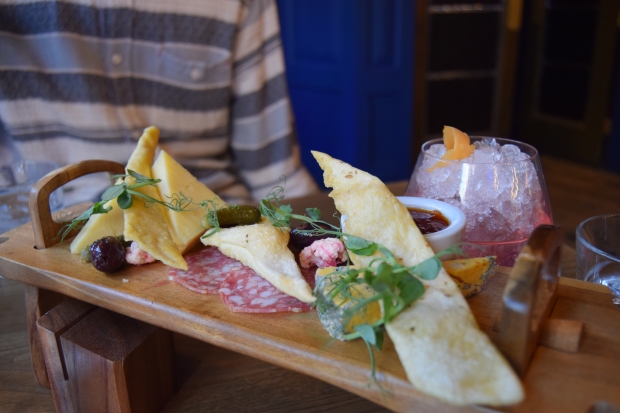 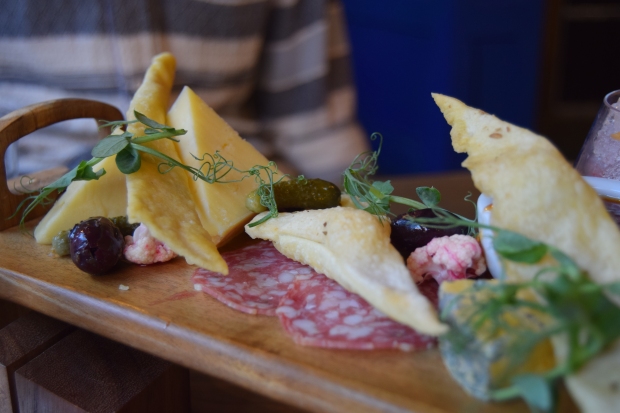 We were then treated to some delectable delights from The Blue Pig’s fantastic deli counter. Stacked with delicious charcuterie and cheeses. We got a mixture of creamy cheddars and tangy blue cheese, along with some soft and salty salami. Accompanied with fennel crackers, pickles, olives, leaves and the best pickled cauliflower I’ve ever tasted – I’m still thinking about how good it was now! To compliment the deli board we had a glass of wine each. I decided on a Spanish white which was crisp, dry and refreshing. 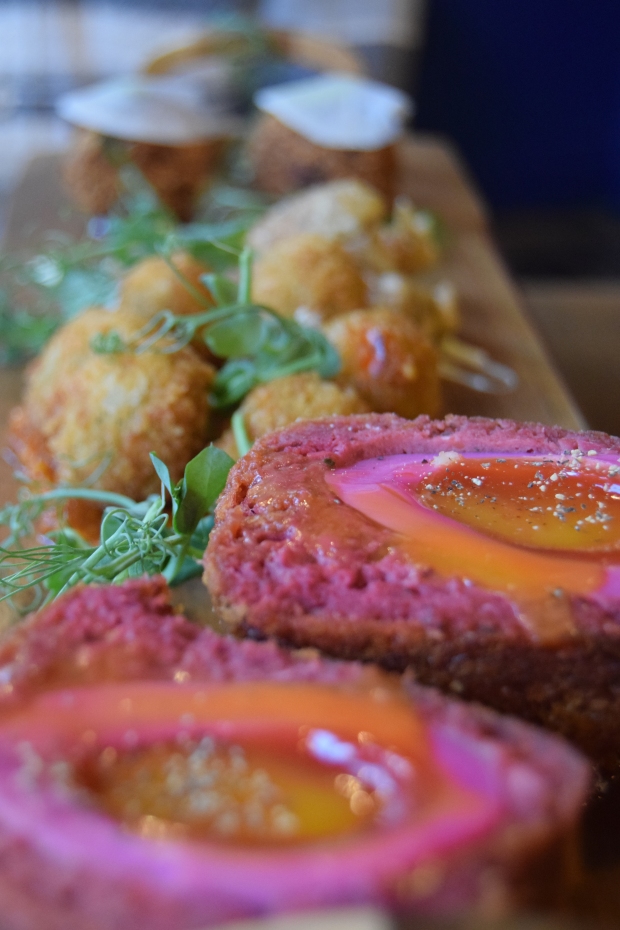 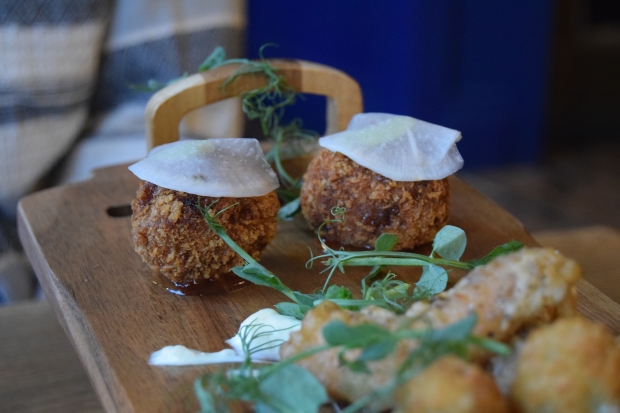 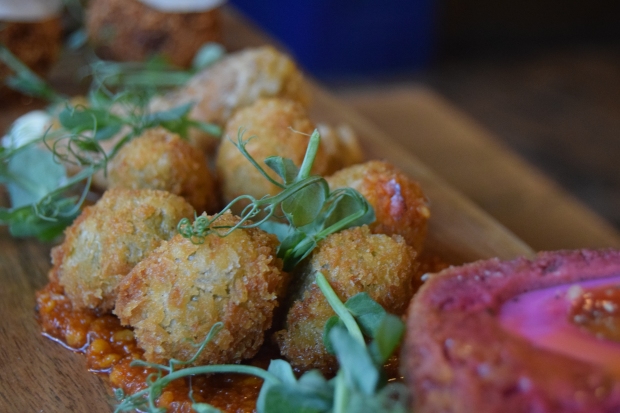 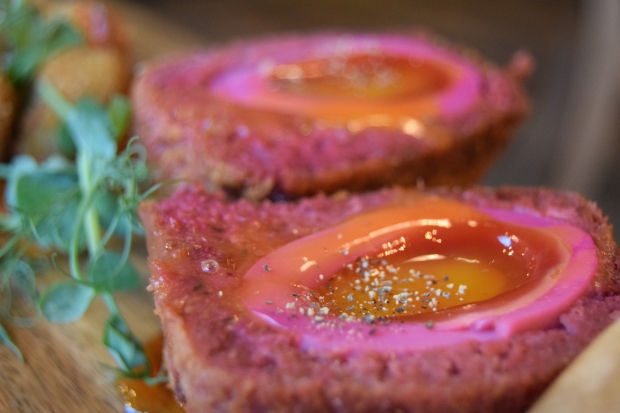 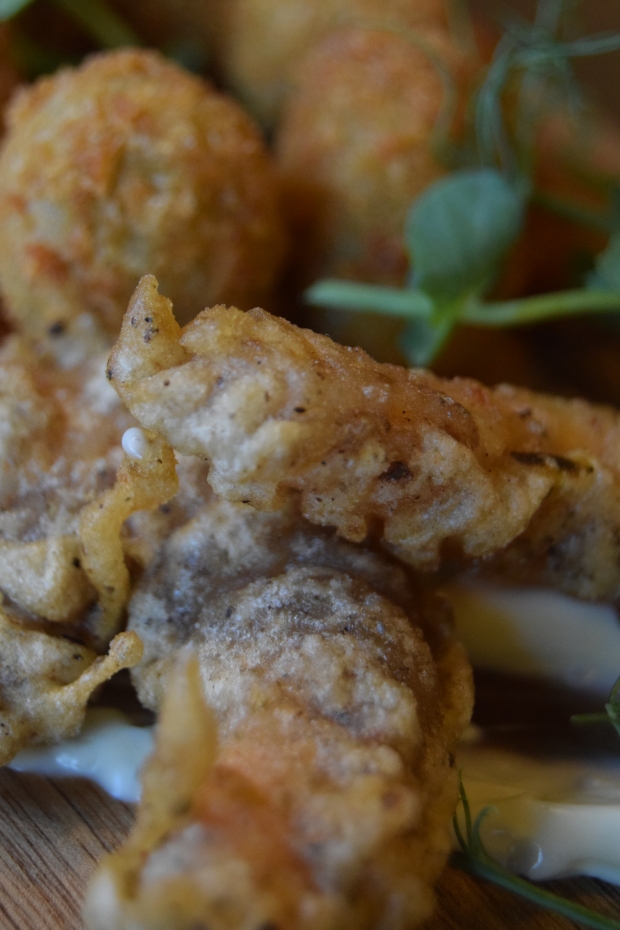 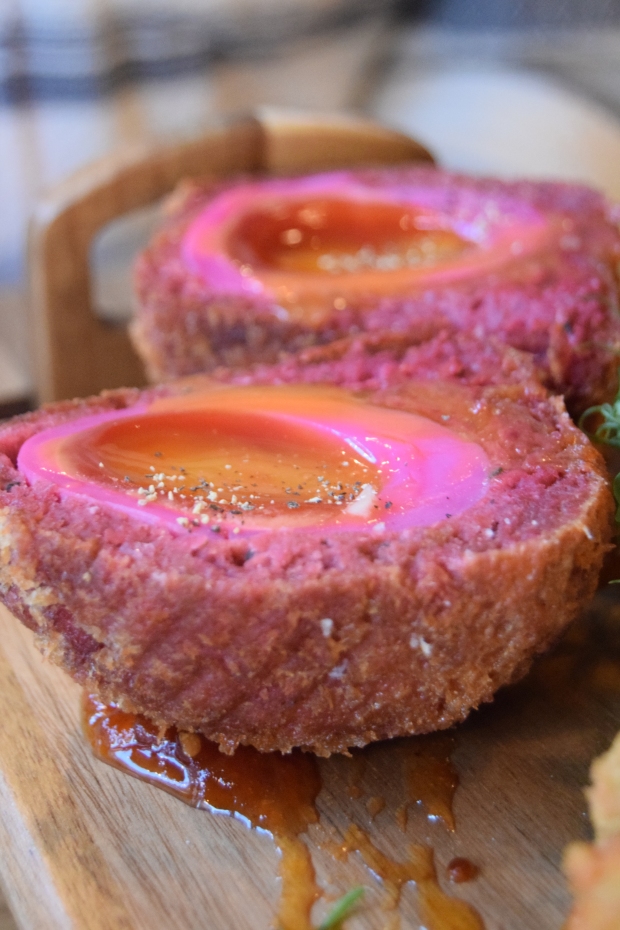 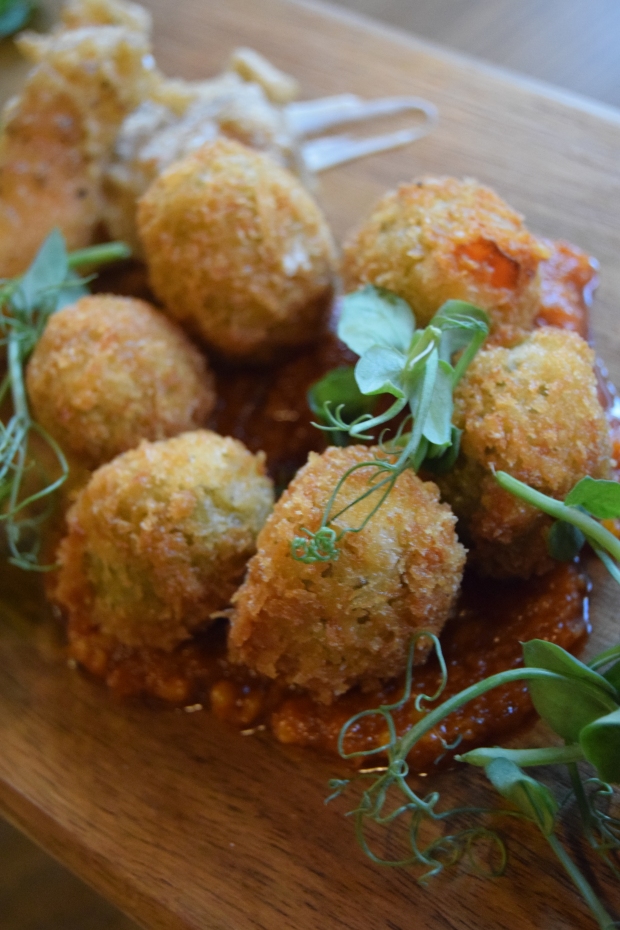 We then got to try a selection of small plates. Feta stuffed olives on a bed of romesco sauce – these were delicious, the feta was so creamy and a great contrast against the crispy, light batter. Then we had some gorgeous plump tempura jerk prawns with citrus mayo, followed by Asian pork bon-bon which sat on a spicy throne of spicy wasabi paste. Last, but certainly not least was the incredible beetroot and falafel scotch duck egg, which was insane. Served with a ginger and rhubarb jam, this badboy was probably my favourite dish. The duck egg has such a rich flavour and the beetroot bought just that extra bit of moisture – bloody lovely. 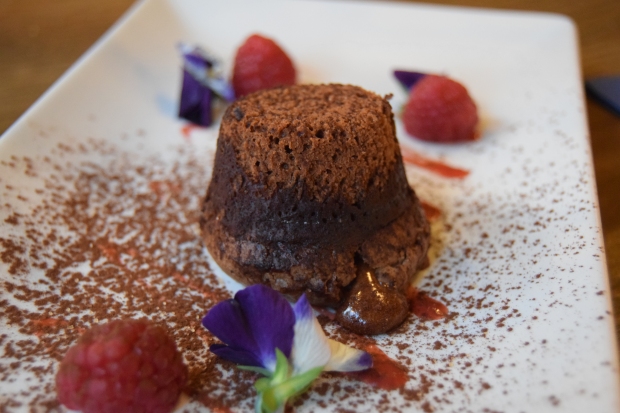 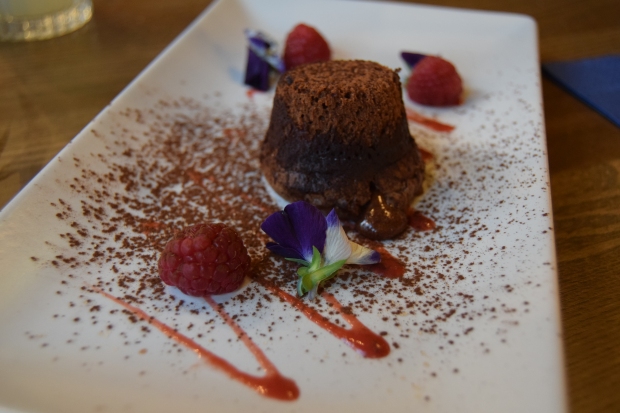 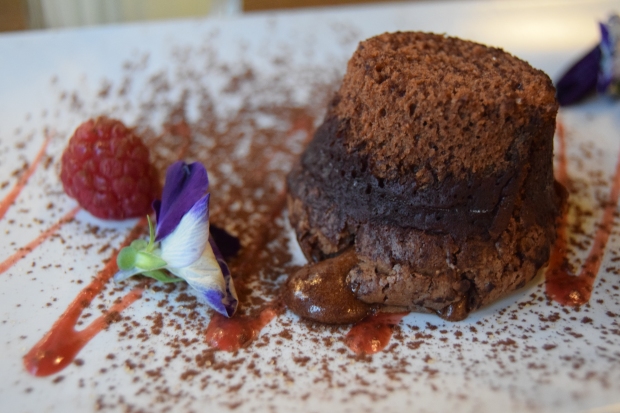 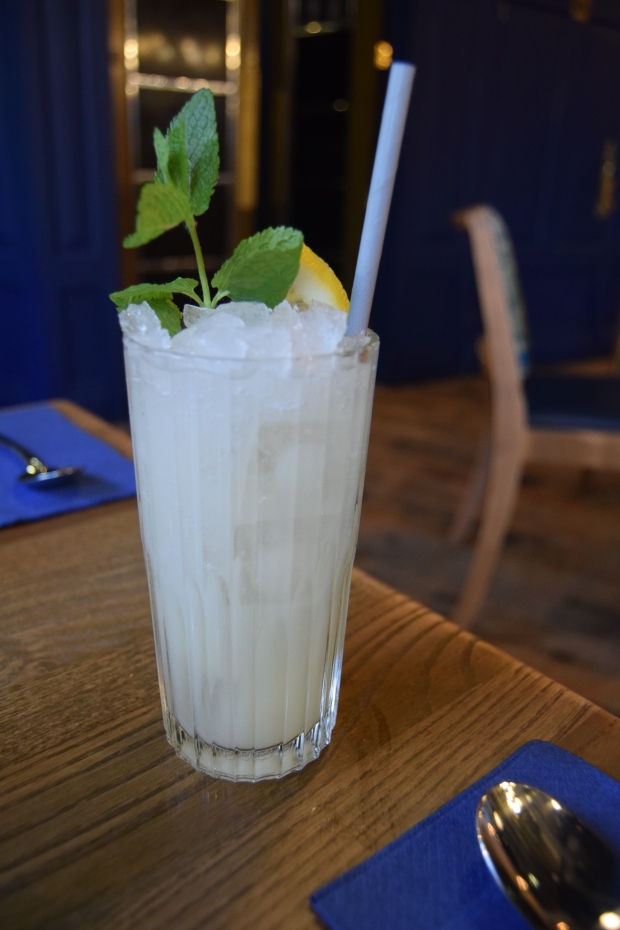 To finish we had a fluffy chocolate fondant with raspberries and edible flowers – look how pretty! And a zesty Lemon Curd Collins to wash it all down, a blend of Ketel One Citron, Limoncello, lemon curd, vanilla syrup, orange bitters, soda top. Lip-smackingly good!

A huge thanks to the staff and management at The Blue Pig for inviting us down to try the taster menu – we enjoyed it so much.

What do you like the look of on their new menu? Let me know in the comments below! 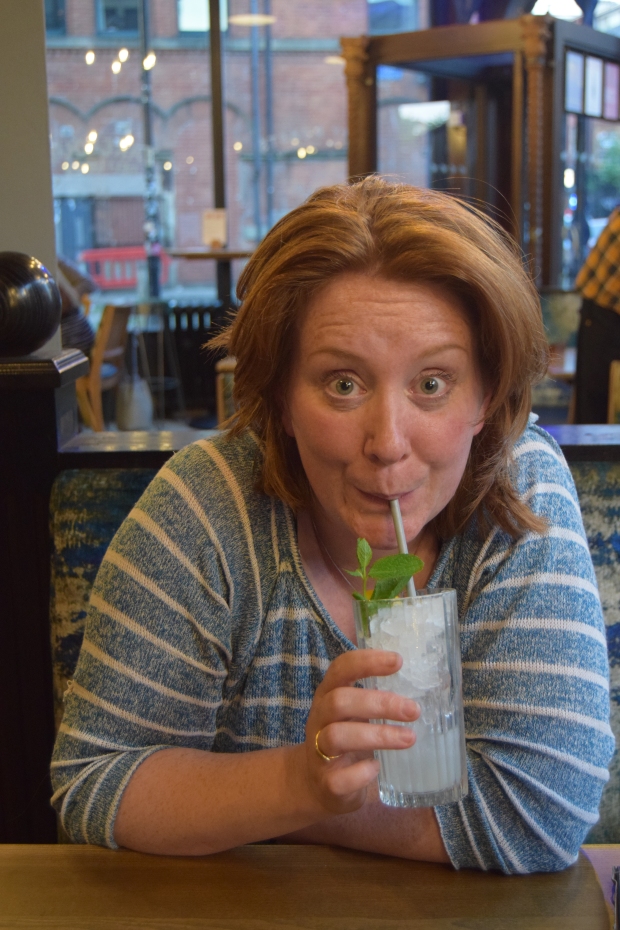